Geertruyd Van Nijmegen. (Or, “The Scourge of Syphillis II”).

Acrylics on paper. About A3.

Over the years, I’ve spent many happy hours playing music in the snug of Hughes’s pub in Dublin. I haven’t been in for a while; a visit is long overdue. In honour of Michael.

New artwork: The Death of Reason. 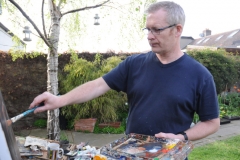 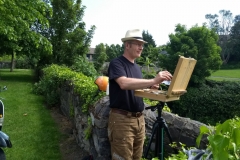 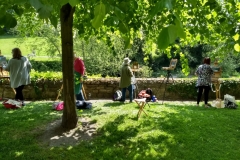 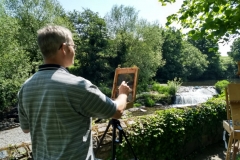 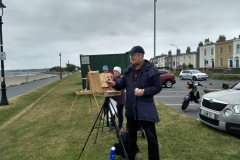 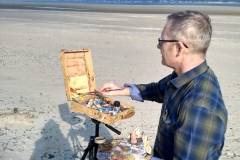 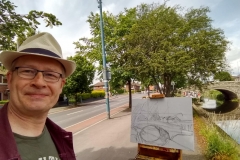 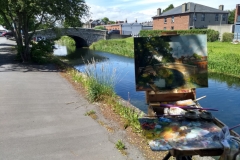 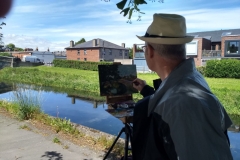 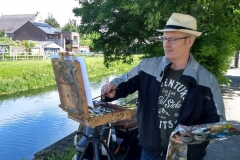 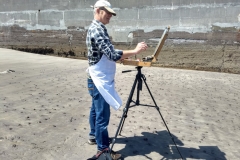 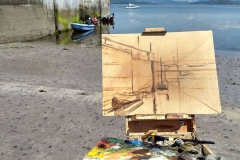 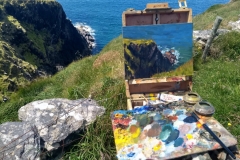 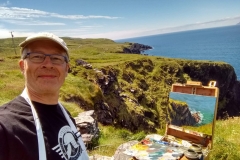 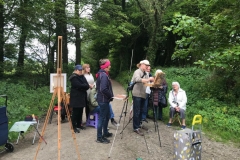 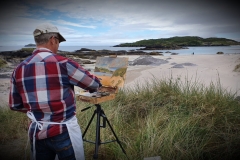 I’ve been doing a lot of ‘en plein air’ painting recently. There’s no doubt about it -it’s a beneficial exercise. Painting outdoors and in public hones your drawing and painting skills -and frankly; gets you noticed. The weather has finally settled into something like a summer and it’s good to get out and about.

I also enjoy talking to passers-by. I’ve never really had anybody cause problems although I know an artist who has had one twit get all aerated because he thought he was in the painting and managed to convince a guard (a second twit) to move the painter along. What an absolute pair of berks.

I’ve just had a relatively easy week, though. I’ve been at the fantastic Cill Rialaig Artists’ Retreat and had the time and freedom to explore the gorgeous county around South Kerry.

Anyway; I teach this stuff and if you want to have a go, have a look at my teaching web site, www.McSherryStudio.com

I’m delighted to say that my painting, ‘Uachtarán’ was selected to be part of this year’s RHA Annual Exhibition. See more information about dates on their web site.

I took advantage of the fine weather this afternoon and set up my easel in my own garden. I enjoyed myself so much I lost track of time; by the time I applied the last stroke I was tired -and cold from standing in one spot for a couple of hours. I’m delighted with the way it turned out -just wonky enough to satisfy my desire not to become overly descriptive.

On another note -or rather more of the same note, I signed up to Art in the Open, the en plein air painting festival in Wexford. It’s on from July 27 – August 5 and I’m very excited to be a part of it.

180817 Swallows. Indian Ink and Affinity Designer. Giclée archival signed, numbered and titled limited edition print of 125 on Hahnemuhle German Etching paper (printed by The Copperhouse, Dublin). Contact me at kevin @ mcsherry.ie Don’t forget to follow me on Instagram and Facebook.

There are two standing stones with crucifixes carved into them at the ancient Cill Rialaig monastic site on Bolus Head, County Kerry. These are very early monuments in Irish Christianity -perhaps from around 500 AD. They both face west but the crosses are described differently. I’ll make an artwork inspired by the other one as I go on. I was lucky to have my eldest daughter, Mathilde with me. She’s studying ancient and medieval art and culture in Trinity, so I got an informed opinion on the subject into the bargain.
We scouted around the chaos of tumbled and weathered stones for a while, indulging ourselves with fantasies of how the settlement must have looked in its heyday; but the rain fell down on us and we started to lose the light. I discovered my hiking boots weren’t as watertight as they should be, but I endured for the sake of Culture!
Print: Hand inked and coloured in Affinity Designer. It will be a limited edition of 125 on Hahnemuhle German Etching paper by The Copperhouse . Signed, numbered and titled, ‘Crois Chéasta Chill Rialaig 1’ (that’s a working title until I can verify the Irish.) 8″ x 10″
I teach painting in my studio in Dublin: Find out more at www.McSherryStudio.com

I was invited to submit works based around the theme ‘The City’ to le Louvre open submissions show in Paris. Acrylics on canvas. 12″ x 26″.

As an antidote to my last post: "Peak Beard". Acry

"Yellow Roses and Silver Against Blue". Oils on ge

Saving the Harvest. Drawn as my contribution to th