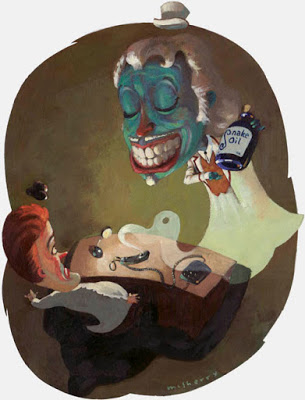 I’ve been working for some time on a series of illustrations to be produced as prints. It’s an avenue that I’ve been exploring as a way out of the drudgery of ‘jobbing’ illustration. This is how I’ve been feeling for more than a year, now. Working for those who either lack the imagination to extrapolate from a simple sketch or who see artists’ skills as merely a way to realise their own ideas has palled. None of this is their fault, since they’re paying for a start and I’ve colluded in this state of affairs myself [I’ve willingly bought the snake oil salesman’s promises] but it is a strong indication that I’m really in the wrong end of the business. 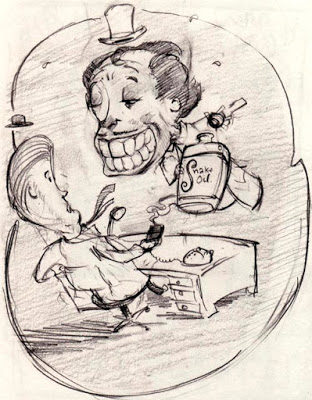 Producing my own art for my own products is also fun, which is the bit that has been missing, of late. All art has to have a LARGE amount of the artist invested in it, if it is to be any good. If it doesn’t, it enters the world still-born; a lifeless conjoined monster of conflicting personas, likely to be shunned. You can’t, as many people seem to believe, micro-manage an artist’s work and expect it to shine. This is absolutely the very worst aspect of being an illustrator. I suspect that the same applies for designers and advertising creatives, copywriters or any ‘applied artist’.
So, this way if the idea fails, then it will have failed on my terms -because of my imagination, my drawing skill, my own efforts. So be it. If the idea succeeds, then I’ll reap the benefit -on levels much more important than the mere accrual of money. For me, illustration has been like a bottle of balm sold by the credible-sounding man in the white suit -just buy this and all your art troubles will be over! Become an illustrator and be an artist who actually gets paid! Strangle that snake oil salesman who lives inside your head -he’s full of empty bottles and unkeepable promises. Here’s my advice to any young artist thinking of becoming an illustrator: Think very very carefully -do you really want to make your much-loved hobby into your job? Perhaps, before embarking on your career, read ‘The E-Myth Revisited’ by Michael E. Gerber, then at least you might approach it with a plan in mind. 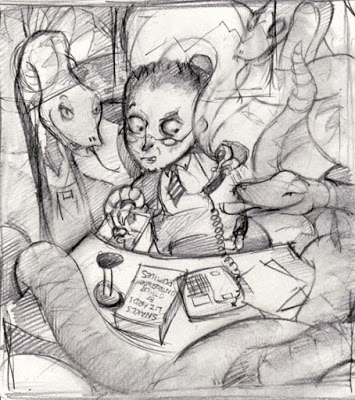 This wasn’t meant to depress -I’m excited about my art these days -but only art that is truly, or even largely, mine. I get more joy out of a small sale from my little still life studies than I ever did from a big illustration project because I know that a beautiful, personal connection has been made and that the love invested in the small painting generated love in return. As Paul McCartney wrote; In the end, the love you take is equal to the love you make.

As an antidote to my last post: "Peak Beard". Acry

"Yellow Roses and Silver Against Blue". Oils on ge

Saving the Harvest. Drawn as my contribution to th