Over the years, I’ve spent many happy hours playing music in the snug of Hughes’s pub in Dublin. I haven’t been in for a while; a visit is long overdue. In honour of Michael.

Joe and Steve Wall (The Walls and formerly of The Stunning) dropped in to see my exhibition in la Galerie Impromptu, Harold’s Cross and to play the Peacock Guitar.

I received the unadorned guitar about eight months ago from Chris Maher of The Musical Youth Foundation and although I began work on it almost immediately, I ran into a couple of difficulties, mostly at the finishing end (there’s nothing clear about lacquer!) However, I eventually made it through.

I made a short video recording the process by which I decorated it -and then the lads give it a blast of, ‘Are you Lonesome Tonight’ at the end.

For anybody who likes to paint; I used Golden Artist Colours ‘Fluid’ paint to keep the strokes flat but still intense. In the Golden range are also some iridescent paints which were ideal for some of the bright plumage. The edges and other gold areas are gilded.

You can still see this artwork at la Galerie Impromptu until Sunday June 26, when the gallery closes and reverts to a disused laundry. The proceeds from the sale of this guitar will go to the Musical Youth Foundation who provide access to an education in music for ALL children in Ireland.

Reproduced from the ‘Our Community‘ page in the top menu.

I’m writing an open letter because you’re almost impossible to find.  I think it’s vital that the environment in which we live contains art. We have plenty of places to eat. We can drink buckets of coffee. There are lots of shops where we can buy provisions. We have great pubs, enough accountants and enough solicitors and many estate agents. We all live together and share this locality.

What we have very little of is Beauty in our environment. Why not do what you can to make this place look better.  Little things matter a great deal: just take a look at what Terenure Office Supplies do with their fabulous window displays for the children around Christmas and other significant occasions during the year. Magnificent. They deserve our full support.

This does matter. This activity brings joy -and that’s what will motivate people to turn up to our village centre and maybe even buy stuff -or rent our vacant properties!

Here in Terenure, (and indeed all over Ireland) we have lots of empty commercial buildings. Some have been vacant for many years. Why not use Art to show how a village could look? Just a thought. Use Art to create a buzz around the place. Show how the buildings look when in use and lit brightly. Give something back to the people who we rely on to support the businesses in our locality.

Take a moment to think about how it could be if we all pull together. Of course, I’m asking that this be done as a community service. I don’t have any money to pay for premises. I hardly have the money to pay my own mortgage; I just have my art, my enthusiasm and great connections to many wonderful, joyful artists with global reputations. I’m willing to muck in and organize a fantastic show for nothing; including sourcing print, putting together an opening party, publicising the event and manning the show for the duration of maybe a month. Will you muck in?

Have a look at the splendid video below, produced by the wonderful Sophie Spendel who’s over from Holland, a country where they celebrate creativity and beauty and community activism. It’s hard enough when the economy bursts -and then the clouds burst above us as they’re doing as I write. Why don’t we just celebrate life? Create something to see that takes us outside of mundanity? That’s why we work, isn’t it? To fund our lives outside of work.

I didn’t set out to write a letter like this; I was only going to have this page for the video but I became moved to do so after so many rejections and expressions of indifference. We owe this to ourselves, because we all have to live here. It can’t be that difficult.

I must confess that I’ve never worked through the night; never worked late shifts.  I’ve always managed to avoid them,  even when it looked like shift work would come in in one of the printing jobs I had when I worked in that trade.  So it was with hesitation that I accepted the task of a painting project in the Guinness Storehouse Gravity Bar which had only very limited times when the work could be done – from 7pm to the following 9am.

I love my bed,  you see.  I don’t like missing any opportunities to sleep.  Even after  a moderately late night,  I feel exhausted and cheated of my rest.  To stay up over night is my idea of hell; to stay up all night working is worse.
The Guinness Storehouse has been shortlisted for  kind of Oscars of the travel industry.  It’s  up there,  competing with the likes of the Parthenon,  the Colosseum,  Buckingham  Palace and the Eiffel Tower.  Not bad,  eh? So Guinness wanted to celebrate this success with a window painting of the other six candidates as if they were all on view from the Gravity Bar.  Very good idea.
And this project did have its excitements. It would be an opportunity to experience  the beauty of seeing the sun set and rise again from the best viewpoint in Dublin city,  with its panoramic,  almost 360° arc of windows. And so I did see it.  The attached video is wonderful but it could not possibly capture the full glory of that scene – and  it was on one of the clearest and warmest of midsummer evenings.
The video also makes everything look speedy! Creatives in Ad agencies spend a lot of time and energy in trying to get across the story that a pint of draft Guinness takes a long time to pour compared to all other beers.  Well, just like an expert Guinness barman pulling a pint of the black stuff,  this painting took quite some time to prepare. I drafted in my daughter Mathilde to help. To the creative director and cameraman’s dismay (they were there to oversee and record the proceedings) nothing much seemed to be happening for the first couple of hours – just layers of undercoat building up an opaque ground.  The creative director, Gillian Herlihy did admit afterwards that she had begun to lose heart at that early stage!
But of course,  it all came together wonderfully.  With unusual foresight, I had brought a sleeping bag with me and managed to get an hour or of sleep inside the circular bar. Then up at 2.30am to start work again. The funny thing was,  I didn’t really feel the night passing at all, so absorbed was I in building up the details.
I finished slightly ahead of scheme too and was dabbing on the final touches as the creative director and cameraman padded in after their own short night of sleep.  So that’s the long of it.  I practically lapsed into a catatonic stupor for much of the following week but,  like the perfect pint,  it’s all in the preparation and it was well worth the wait.

Harold’s Cross Festival continues to be a success and to grow each year, thanks to the boundless energy of many local people; this year, artist Eoin MacLochlainn organized a small exhibition of local artists in the Victorian Tea Rooms at Mount Jerome. I was delighted to be involved. 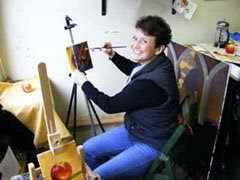 I’ve branched out somewhat and commenced painting classes in my studio. My inaugural class was last Tuesday morning when I had six students along and I started them off painting a single apple. My aim is to keep compositions simple, with perhaps a single object.
I’ve seen many students in art classes, who may not have much experience, try to take on large compositions and become overwhelmed by the task they’ve set themselves. The philosophy at Art Classes Ireland is to gradually build up knowledge and confidence. The second principle is to have fun while learning -the atmosphere is relaxed and convivial. You can see the Art Classes Ireland web site here