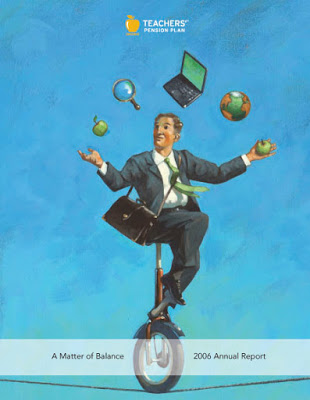 The Ontario Teachers’ Pension Plan organisation have just launched their new financial report, designed by Toronto-based design studio, The Works. The studio art director’s vision for the project used illustration to convey the central theme of this year’s report which is ‘balance’.
Although The Works had a clear idea of the principal image which is one of a high-wire unicyclist, they wished to use other characters throughout the design to focus on other activities of the OTPP. 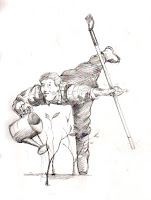 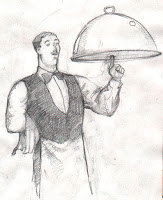 Several rounds of sketches were made to present ideas for various aspects of the report. However, after consideration by the designers and the client, the concept was kept to one character.

You can see here, the development of the central character. The sketch at left was my first rough rendering which was changed according to the designers’ comments. The final illustration kept close to this last drawing, save for the objects being juggled. A nice idea was to show the reverse of the unicyclist on the back cover: 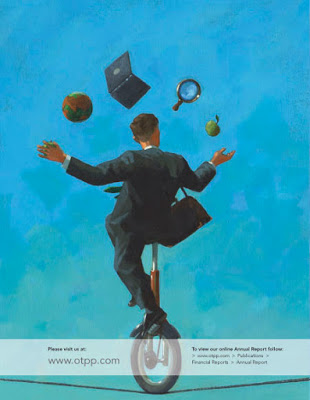 It was fun trying to get the model to balance just that little bit longer while I set up my easel on the other side of the line. A thorough dousing with fixative spray helped him to maintain the pose. The report is now in print and online on OTPP’s web site. and the model has finally been removed from the unicycle and returned to his family.

One from the archives, "French Tea Set and Lemons

"Silverware on Linen Study". From this morning onl