I’m delighted to say that my painting, ‘Uachtarán’ was selected to be part of this year’s RHA Annual Exhibition. See more information about dates on their web site.

If you want to try out this technique of making a warm, monochrome underpainting at next week’s class, you will need the following tubes of ACRYLIC paint:

Ultramarine
Burnt Siena
Flesh Tint (Winsor & Newton) or Warm Bright Yellow (Sennelier)
Titanium White
This technique provides you with a great big safety net for you when you get to the point of adding colour by glazing -and the results can be beautifully rich and lustrous. I often use this method in my hand painted illustrations as I can get the whole work planned out in monochrome before committing to colour. In the image above, I didn’t even glaze colour and left the brunaille as it was -I thought colour would detract from this one. If you’d like me to hold a demonstration in your area, why not drop me a line at kevin@mcsherry.ie?

Lately, I’ve been doing more and more ‘brunailles‘, in other words, three colour paintings usually made in order to establish tone before glazing over with colour. I was captured by how much expression can be made without very much colour at all.

Also by the way the light pigment (in these cases, Sennelier’s Warm Bright Yellow) seems to almost emit light. These old nurse’s uniforms look fantastic where the white parts are represented thus.

You can ‘tip’ the emphasis from cooler to warmer greys by adding more ultramarine or burnt sienna to the three colour mix -as you can see in the warmer, redder cast to the second painting. 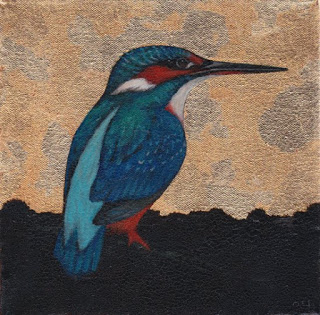 Well, 2016 has arrived. I hope that the rain will abate soon because if it goes on the way it has, we’ll all be washed down the Swanee. We’ll all end up doing a spot of trout fishing.

Continuing with the work I’ve been at over the last while, here’s another of my favourite birds. This one is ‘Halcyon III’. Gilded Acrylics on canvas. 8″ x 8″. 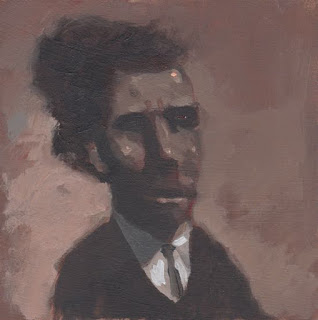 I did a small demo for my morning students yesterday. I wanted to show them how to make a warm monochrome underpainting.

I think he looks a little like the actor Paddy Considine having a bad hair day.

This is now the 200th anniversary of the Battle of Waterloo, where
Arf  ‘I’m not Irish!’ Wellesley and Abba fought the combined legions of the French Empire under Napoleon Dynamite. There were some Prussians involved who turned up late/or just in time, whatever your point of view.

I wasn’t there, in fact. And neither were you. But for the Irish, it was a win-win/lose-lose situation considering we fought on both sides. Isn’t that a topsy-turvy way of going about? Not at all odd, really considering the circumstances in Ireland at the time.

So here are the lyrics of a song which has been passed down through two hundred years and which still ring true. If you think my painting is mad, try European politics:

The Wheels of the World

Come all you true sons of Erin; attend to these few simple lines:I’ll sing you a song about spinning. It was a good trade in old times.Some they spun worsted and yarn, and others they spun flax and tow.By experience, my friends, you may learn how the wheels of the world they do go.Luther spun out his existence, and so did King Henry the Eighth.John Calvin by Satan’s temptation, their maxims he did imitate.Tom Cranmer he joined the new system, and swore he’d make spindles of steel.Pluto himself did assist them, perdition that turned their wheel.


CHORUS: So these are the wheels of the world, my friends, you must all understand.For three hundred years, they’ve been spinning destruction all over the land.John Mitchell the brave son of Erin, declared that a spinner he’d be.He got all his wheels in full motion, his dear native land to set free. But Lord Clarendon the lieutenant, at spinning he was fully bent,And unto the Isle of Bermuda the sons of Hibernia were sent.Lord Nelson he was a good spinner on board of the ship Victory.He was counted the greatest of spinners that ever set sail on the sea.His shipmen were all famous spinners. For Nelson they spun very well,But the French spun a ball in Trafalgar, and on the ship deck Nelson fell.Billy Pitt too was a good spinner, and so was Lord Castlereagh.Sure they spun out the Union from Ireland. To England they shipped it away.Poor Billy spun out his existence, and banished in Charon’s old boat.Then Lord Castlereagh saved his distance, by cutting the rim of his throat.Napoleon he was a good spinner, for freedom did always advance.Over deserts and great lofty mountains, he led on the brave sons of France.Old Wellington he went a-spinning. His wheels they were at Waterloo;But if Grouchy had never been bribed, the French would have split him in two.Prince Albert came spinning to England. His wheel by a compass did steer.He spun out a queen for his consort, and some little thousands a year.John Bull must now go a-spinning. A few thousands more he must fork,For the Queen has another young son that was spun in the city of Cork.The factory masters are spinning. Their wheels they are turning away,And now they are wanting their hands for to work thirteen hours a day.They don’t care a fig for the poor. They heed not their sighs nor their moans.They don’t care a pin if you work till you spin all the flesh off your bones.The rich they are all famous spinners, and you are very well sureThey are always contriving a scheme to crush down the rights of the poor.So if you’re compelled to go spinning, let each of your spindles be steel.Let “Liberty” then be your motto, and glory will turn your wheel.
***
You can even hear a version of the song sung by the excellent Len Graham: https://beta.prx.org/stories/141307 Starts at 15mins 15secs. 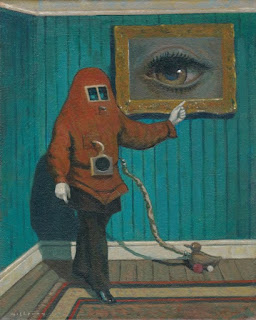 Well isn’t this a turn-up for the books? It’s the Friday evening of a week where I’ve actually managed to paint a couple of pictures. I know that seems an odd thing for a painter to say but it’s perfectly true.

My regular art classes are finally finished for the summer and I now have a few months in which I can indulge myself. Most of my time is spent up to my oxters in admin for my classes -and once you start into that craic, whole days are lost, for admin is the opposite of art.

Sometimes I have to force myself to paint in order to get anything usefully artistic done. It wasn’t the way I thought it would be when I started: I thought that running art classes would make a perfect dovetail joint with my artistic endeavours. Oh well, it’s better than penury!

Early on this year I bought a set of Golden ‘Open’ acrylics in Evans just to test them out. For some reason, I bought mostly cool colours: Pthalo Blue, Alizarin Crimson, a rather toxic-looking yellow, Titanium White and Viridian. Luckily I also bought a Pyrrole Red which helped warm up all the hues in this painting.

In the end, though, I figure that it turned out exactly as it would had I used regular acrylics. I didn’t find the slow-drying quality helped in this instance. It’s not that kind of painting.

So here is the result of my late freedom, ‘The Intriguing Obsessions of Uncle Eugene’. Acrylics on canvas. 10″ x 8″. SOLD

By the way, if you’re about and you want to attend a workshop in portraiture that I’m holding in Terenure this Sunday June 14, call me on 086 247 0737. Mention where you read this and I’ll give you a discount of 15% on the €60 fee. You would need to book, though -don’t just turn up! There are 3 places left. 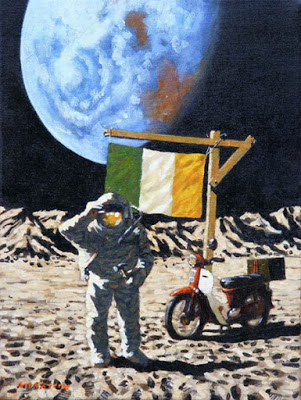 Ireland should do this not because it’s easy; but because we’ve a lot of unemployed builders.

Back to the world of editorial illustration. Last Sunday saw the publication of this meisterwerk in the Sunday Tribune. It was commissioned to accompany a profile article on John McElligott, MD of eBay Ireland. McElligott made the point that rollout of broadband in Ireland is proceeding very slowly indeed and is an impediment to online business, nay; an embarrassment . And so say all of us.

After presenting a few ideas, all along the same lines, the ‘Traveller’s Caravan’ idea was selected, I think because it conveyed the idea of commerce more succinctly [and isn’t eBay the territory of second-hand goods’ sales and virtual tinkerers?] Additionally, it gives a sense of old Ireland and its unhurried ways.

Once I got the go-ahead, I sketched the composition out on the stretched board, as usual and layed down a wash of sap green.

Part of the idea was for certain elements to break the bounds of the background. I also felt that the character should have an air of someone confounded by his circumstance, rather than horse-whipping the snails, as in the preliminary sketch*. It only remained to start working up the colour. I added a flat cap to one of the snail team to emphasise the bucolic atmos. In so doing, I inadvertently made the snail look like Jackie Healy-Rae. Cool! 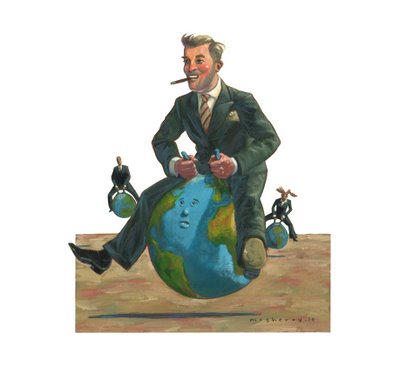 A Very Bouncy Project
I’ve just completed a small movie, tracking the course of a single illustration. It should go some way to explain how I work -at least once rough sketches have been approved by the client. I had enormous fun making it. Basically, it’s a series of still shots taken while the artwork was being hand-painted in acrylic on Arches watercolour paper [my preferred method!].
Click here for the movie
You’ll notice that I decided some way into the work to eliminate the background. It’s a decision I allowed myself as I had complete control over the final look; the final art not being created for a client.

The thing that really got me excited about the project was licencing the music. It’s the first time I’ve ever ventured into the whole area of licencing a piece of art as a client. Joanna at www.penguincafe.com was wonderful, however, and seemed enthused about the idea. I was sad to learn of Simon Jeffes’ [the Penguin’s composer and founder] untimely death some years ago; it completely passed me by. I’ve loved his eccentric music since the early eighties, although I think he even arranged music for the absurd Sex Pistols film ‘The Great Rock ‘n’ Roll Swindle’, so the PCO go back quite a bit further.

One from the archives, "French Tea Set and Lemons

"Silverware on Linen Study". From this morning onl